Groovy way to see if thread execution had errors

February 13, 2010
I had to write a script that did something and for a faster run I decided to use threads.
I needed to start a thread to do some task and then to be able to check that it had finished without an error/exception.
In Java if the code executed in a new thread throws an error, it doesn't matter that much, it just executes the next instruction after thread.join().
Some solutions found on the internet were
Luckily in  groovy we have dynamic object behaviour.
So my solution is to add a new field to the Thread class, and use Thread.setDefaultUncaughtExceptionHandler to populate it.
It looks something like

And now I can see if any exception/error has been thrown. And all the threads I start will have this property.
groovy

Popular posts from this blog

How to decompile apk from Play Store

February 11, 2013
This is how you can decompile an application you have installed on your phone. My phone is rooted, uses RootBox 3.5 and has BusyBox installed. You may need to have that too if you want to follow my steps completly. Let's start: 1. Install application from market 2. Download apk to computer First you need to locate the apk on the phone. Connect to the phone: adb shell Find the apk in the folder the apk are downloaded to. It is ussualy in '/data/app/' or '/system/app/'. The apk is called as the id from the Play Store, for example 'com.something.someapp.apk'. You can see this in the url from Play. Next you need to pull it to the computer. Once you have located the apk and know it's name exit adb. On your PC execute: adb pull /data/app/com.something.someapp.apk 3. Transform apk to jar I use dex2jar dex2jar-0.0.9.11/d2j-dex2jar.sh com.something.someapp.apk 4. See the code inside the jar I use Java Decompiler Just open the
Read more 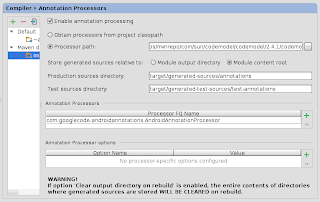 This is my previous post updated for the new versions of intelliJ Idea 12 and Android Annotations 2.7 1. Create your project with Android Maven Plugin Read the GettingStarted You can run this command to get the basic structure: mvn archetype:generate \ -DarchetypeArtifactId=android-quickstart \ -DarchetypeGroupId=de.akquinet.android.archetypes \ -DarchetypeVersion=1.0.9 \ -DgroupId=com.tagonsoft \ -DartifactId=ExampleApp Add/Edit the dependency to android: With android from central mvn repository: com.google.android android 4.1.1.4 Or with android from maven-android-sdk-deployer : android android 4.2_r1 provided Run 'mvn idea:idea' to get the basic idea project to start with. 2. Add AndroidAnnotations to maven pom.xml com.googlecode.androidannotations androidannotations 2.7.1 provided com.googlecode.androidannotations androidannotations-api 2.7.1
Read more

Ways to map and query many-to-many in GORM

November 18, 2009
I played with many-to-many relations in grails and found some interesting ways to work with them. First the domain definitions. For the purpose of this demo I chose the classic example with books and authors. A book may have many authors and an author may have many books. class Author { String name } class Book { String name } What I consider the silliest way to define your domains I found here http://www.grails.org/Many-to-Many+Mapping+without+Hibernate+XML They suggest mapping the join table using a domain object and creating the links by hand. On 'books and authors' it would look like class Book { String name static hasMany = [ memberships: Membership] List authors() { return memberships.collect {it.author} } List addToAuthors(Author author) { Membership.link(this, author) return authors() } List removeFromAuthors(Author author) { Membership.unlink(this, author) return authors() } } class Author { String name static hasM
Read more